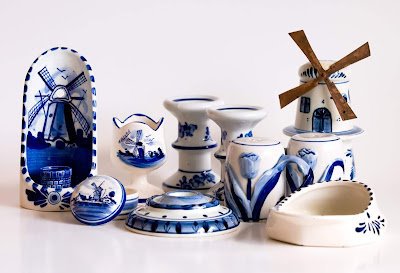 When I was growing up, my aunt's kitchen always caught my interest. She was a very big fan of Blue Delft, particularly anything in blue and white with a dutch theme. Her dinnerware wasn't Delft, but her kitchen accessories were blue and white, and her kitchen cupboards and furniture were white, but the curtains in her windows had blue and white curtains in a fabric that looked like tiles, with a Dutch girl and boy, and windmills.

And so did the floor ... she had bought these tremendously expensive Delft floor tiles and with a top finish on them was so shiny that it looked that a poured resin top. They were slippery as heck, and you could slide around in your sock feet as if you were on a skating rink. 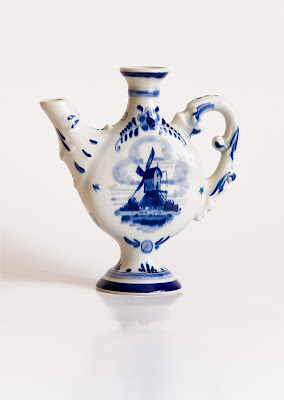 She had large stoneware bottles, and mugs, and jugs in blue and White Delft, and some china jugs (Staffordshire) with blue and white patterns on them. She had other pieces of china and accessories that were Blue Willow, and plates ... oh goodness, many plates of Delft with Dutch scenes on them that hung on the walls. The colonial style lamp that hung over the round, white kitchen table (also colonial) had a fabric shade that was custom made for her to match her curtains.

I always found it somehow "fresh" ... the look of all that blue and white made it seem like a sunny day, even when it wasn't. That blue and white took hold of me, all the way back then and when I got married and had my own place, I used the think my kitchen just didn't look like a kitchen ... not until I started on the blue and white trail too.

My kitchen wasn't Delft - I had a few pieces, very few, in Delft that my aunt had given me, but mine was primarily Blue Willow. I loved it for many years, but eventually decided to give our kitchen a slightly more modern look in earthy tones. I love the new kitchen too, but the blue and white (though nearly all gone now) will always hold a fond place in my heart.

All because of my aunt.