Hey Guys...More Stuff for You!

I put this stuff up there for the guys, but I have to admit...these are pretty much all my tools (except for the duct tape). I had to use mine because nobody can ever find my husband's...not even him. So while this stuff was posted for the handy-men out there, I really do know that women make use of these things almost as often as men. 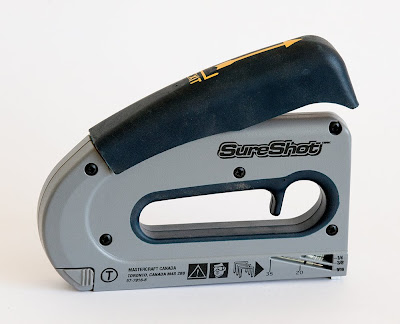 My husband bought this staple gun for me because I couldn't use the old regular one anymore. I don't have the hand strength that I once had and found I couldn't get the staples to go into anything...not even a simple job like recovering a footstool. This one, though - it just works like a charm. 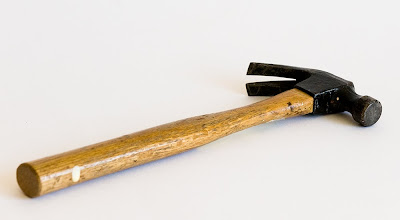 This is my little "ladies" hammer. Smaller and lighter than a normal hammer, it's been pretty handy for hanging small pictures and building crafty projects (small birdhouses, my dollhouse and miniatures). I like it's weight - it isn't so heavy that it throws my aim off like the heavier ones, but it's not much good for driving in heavy nails. 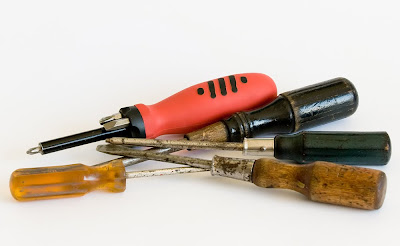 A selection of screwdrivers - two robertson (small and large), and two flat-head; one with a plastic handle, one with a wooden handle. Almost all of these are old - you can see they've been around a while. The red-handled one is pretty handy. It holds a few different heads (phillips, flathead, robertston) and the handle is coated with a foamy-rubbery covering so it won't slip. The handle is fattish around, but it fits a hand really nicely. 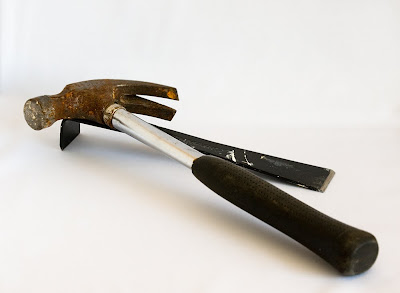 Another hammer - this time more suited to a man's hand, with a metal shank and rubber grip. And a multi-purpose prybar. I love this thing - it's small enough to be useful for me, has a prybar head at one end, a hole in that you can use for pulling nails, and a very sharp scraper on the opposite (more like the edge of a carving chisel) end. Very handy little tool this is. 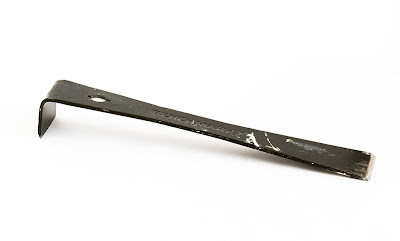 This is just the pry bar on it's own...in case anybody needed a photo of a pry bar. 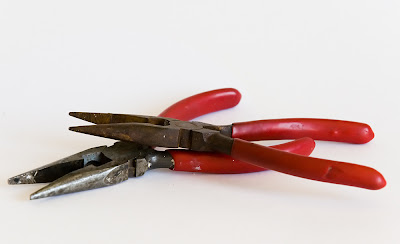 Two sets of old, well used plyers with red-rubber grips on the handles. Does anyone else think that plyers have to be one of the handiest tools in the world? You can grab stuff with them, twist stuff, pull out nails (hammer in small nails in a pinch too), cut wires and hold things steady. Just give me a pair of players and you'd be surprised at what I can do with them. 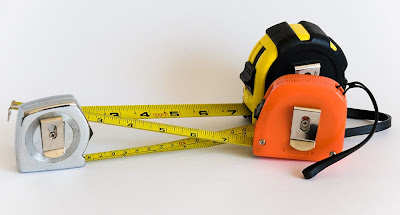 A selection of metal tape measures - well, the tapes are metal, but two of them have plastic casings. That big black and yellow thing is my husband's (I have it hidden so when he needs one, I know where it is...he has two or three of the exact same tape measure), the smaller orange and metal one are mine. 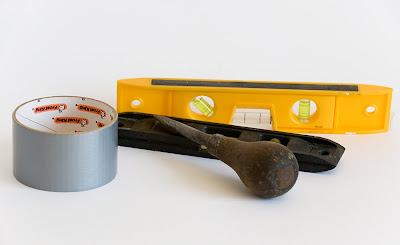 Did ya think I'd left it out? How could anyone not include a man's handiest fix-it tool...duct tape. I have to admit, this is one thing I don't use very often. I usually leave that to my husband. Also in this are two small plastic levels which I use to level small things like pictures when hanging. Oh, and that thing with the round wooden handle is an old awl. I use it sometimes for poking holes in things like leather or heavy canvas, but I have it because it belonged to a beloved uncle, who got it from my granddad, who I never met. 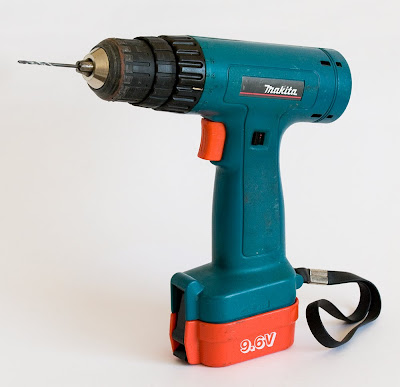 The power drill minus it's cord. Of course, this is a battery operated drill which is pretty popular today. About the only thing we still use a corded drill for is drilling into concrete or really heavy metals. This one used to be my husband's. He bought me one in a kit but before long, he took mine and gave me his. I guess the one he bought me was an 18 volt and this older mikita is only 9. Suits me though...and besides...he doesn't know where his drill is and I least I can find mine...and it has two batteries!
Email ThisBlogThis!Share to TwitterShare to FacebookShare to Pinterest
Labels: awl, drill, duct tape, free pictures for bloggers, free stock photos, hammer, j. gracey stinson, level, plyers, pry bar, screwdrivers, staple gun, tape measures, tools
Newer Post Older Post Home