Going for a little bit of a focus on things related to men, and things men like (usually, but this doesn't include women or significant others, which men also tend to like). Just a few today, probably more in future. Starting off the line-up today, the ever present cell phone.

In actual fact, women use them as often as men, but men (most) have a tendency to like gadgetry, and a cell phone is certainly that. This one is an older model - we still have it (my husband's old one), though it's no longer in use, it does still work. It seems that in today's world, most people can't get by without one.

I have one (at my husband's insistence) but almost never use it. I dunno - I'm not a big phone addict on the whole anyways, and just taking one when I'm going on a hike seems...well, sort of like an intrustion. Usually I have this sort of "object" photo on a white background. Today's is black for a little variety. 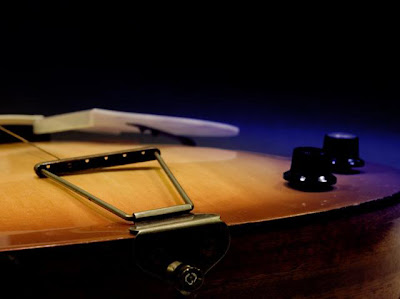 Just an old guitar - well, part of it anyways. For some reason even men who are not very musically inclined seem to like guitars - maybe it's the wood, or the shape, or maybe it's just the dreams people associate with guitars, like becoming a famous singer, or ... maybe it's just wanting to share your feelings through music.

This old baby has been around a while, and she's minus all of her strings except one. Easily repaired, she hasn't been. She sits in her case, all alone.This one belonged to my father-in-law who played it everywhere, and he was good at it. I'm sorry to say he's gone now, and the old girl has been sitting in her case waiting for someone else to love her. 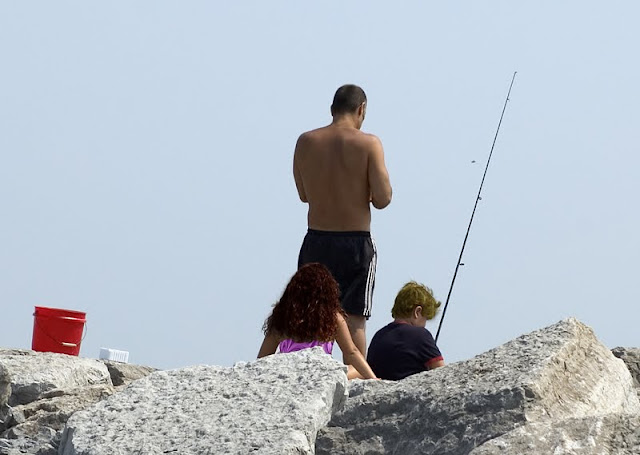 Fishing - another sport taken to rather eagerly by many men (women and kids too). I'm not sure what it is about fishing that grabs men (or anyone for that matter). I used to fish with my dad, sometimes. He wasn't an avid fisherman, but he took me and my sister sometimes when the spirit moved him. I used to love it - not so much the fishing, just that there were some things that my dad and I could do together.

Mostly we caught little sunfish, sometimes a small bass or muskie, and very often catfish. Funny things, catfish...ugly sort of critters, but they taste good if you know how to clean them properly. My uncle...he showed me how he did it once...made me sick and I just couldn't watch. His way (and he was a farmer and fisherman - caught a lot of foods that they ate) was to nail the head of the fish to this stump he had just for doing that...unfortunately, it had to be done when the fish was still alive. Ugh. He sort of lost me right there. I didn't stick around to see the rest. Yuk. 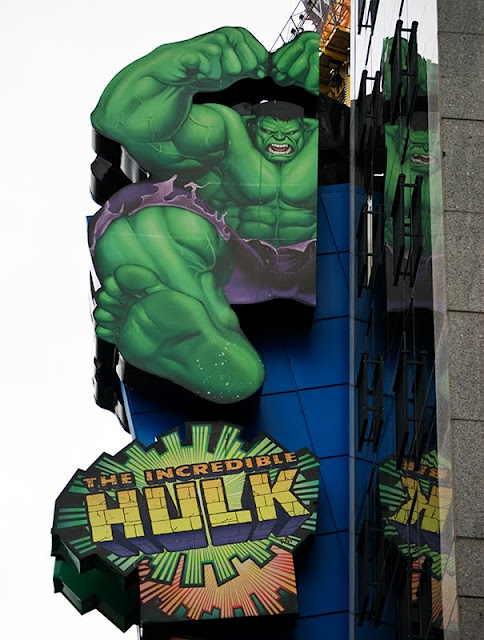 The Super Hero - one of them - and one that's been around a long time.

I remember reading comics about this guy when I was a kid...and my cousin (a guy) used to hand me down his comics, which is why I ended up reading a lot of guy comics.

Today, the hulk has gone through many renditions, and can be found in new comics, TV series, and a number of different remakes of movies. Loved by men, and kids and mostly tolerated by women.

Women have a tendency to like his other personna better.

This image is a sign outside one of event buildings in Niagara Falls, Canada. It was taken a while back, so I don't know if it is still there. 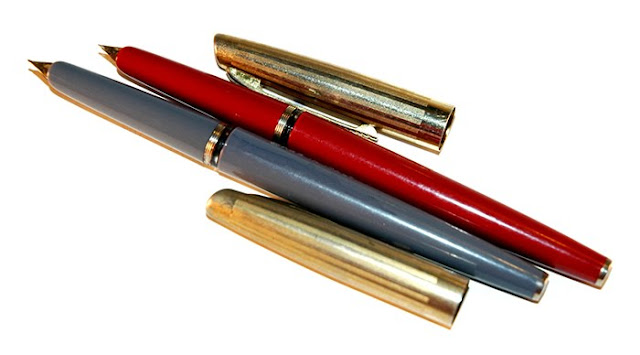 A couple of old fountain pens - these are roughly dated around the 1950s - another old belonging of my dad's. He held on to nearly everything. Men in business often used the fountain pen (some women, but not so many back then), and of course there was a time when such a thing as a ball-point, roller-ball or felt-tip pen didn't exist and fountain pens were what everyone used.

You can still buy fountain pens, and ink cartridges used in them. Older models than the ones depicted didn't use the ink cartridges...they had this little lever on the side and you would dip the nib of the pen into a bottle of ink, and pull the lever out which filled the inkwell inside the pen. Messy. And the ink tends to stain worse than any ball point ink.

Still, there's something elegant in the resulting written work when one uses a fountain pen...even if your handwriting sucks.

Toys cars. There is no denying that these were designed for boys to play with (though some girls will play with them too) as toys. This particular lot are just a generic dollar store toy, but toy cars have gained a huge popularity among men and many collect older models made by Dinky, Hot Wheels, Matchbox, BuddyL, Tootstietoys, Minic, Otaco and numerous others.

Today, all of these collector type cars/vehicles are commonly grouped under "diecast". One name that will come up frequently when you look at the diecast group is Ertl - they have a rather large group of offerings under the diecast tag. 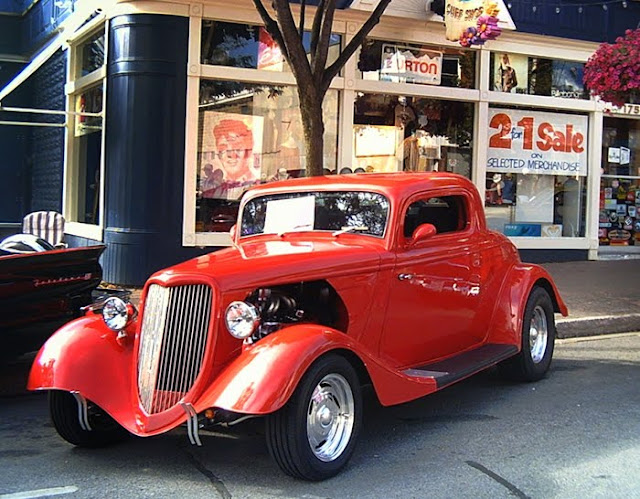 A vintage hot-rod in bright red and black. I haven't quite been able to figure out why these are so popular with men. My husband loves hot-rods like this one, and I've asked him why this type over a vintage Thunderbird or MG, or even a Corvette, and he hasn't really been able to answer me. I love vintage cars too, but my tastes run more towards the more traditional vintage cars and trucks, and not so much the hot-rods.

They look cool - awesome in fact - but looking at the interior of some of these hot rods I have to wonder about the comfort level, which really looks non-existent. Most have very narrow seating in the form of two seats rather than a bench seat, and they are so low to the floor that I often think if you aren't very tall, seeing over the steering wheel has to be tough. Getting in and out looks even tougher for an old person.

I have a sneaking suspcion that these hot rods bring back the "gangster era" to many men (old style "gangster" as opposed to todays "gangsta") - the days when Al Capone and all his cohorts ruled the streets, and a lot of businesses. Money, in the form of quarters. Okay, let's be honest. Everyone loves to have money, not just men. But coins...ah, memories of men walking down the streets with coins jingling in their pants pockets reminds me of my childhood. My dad always had coins...sometimes that's all we had in the earlier years. Later in life my dad saved his coins but always had a small zippered pouch under the seat of his car full of coins.

Coins for parking, for gumball machines, for handing to us kids, and later, his grandkids. Besides the coin pouch, there usually were coins in his pockets too. Oh, and I nearly forgot the plastic squeezie coin pouch with the little chain on the end ... dad used to have those too. Does anyone else remember those?

Above is a variety of quarters (25 cent coins), mostly Canadian but topped by an American coin, Eagle-side up.